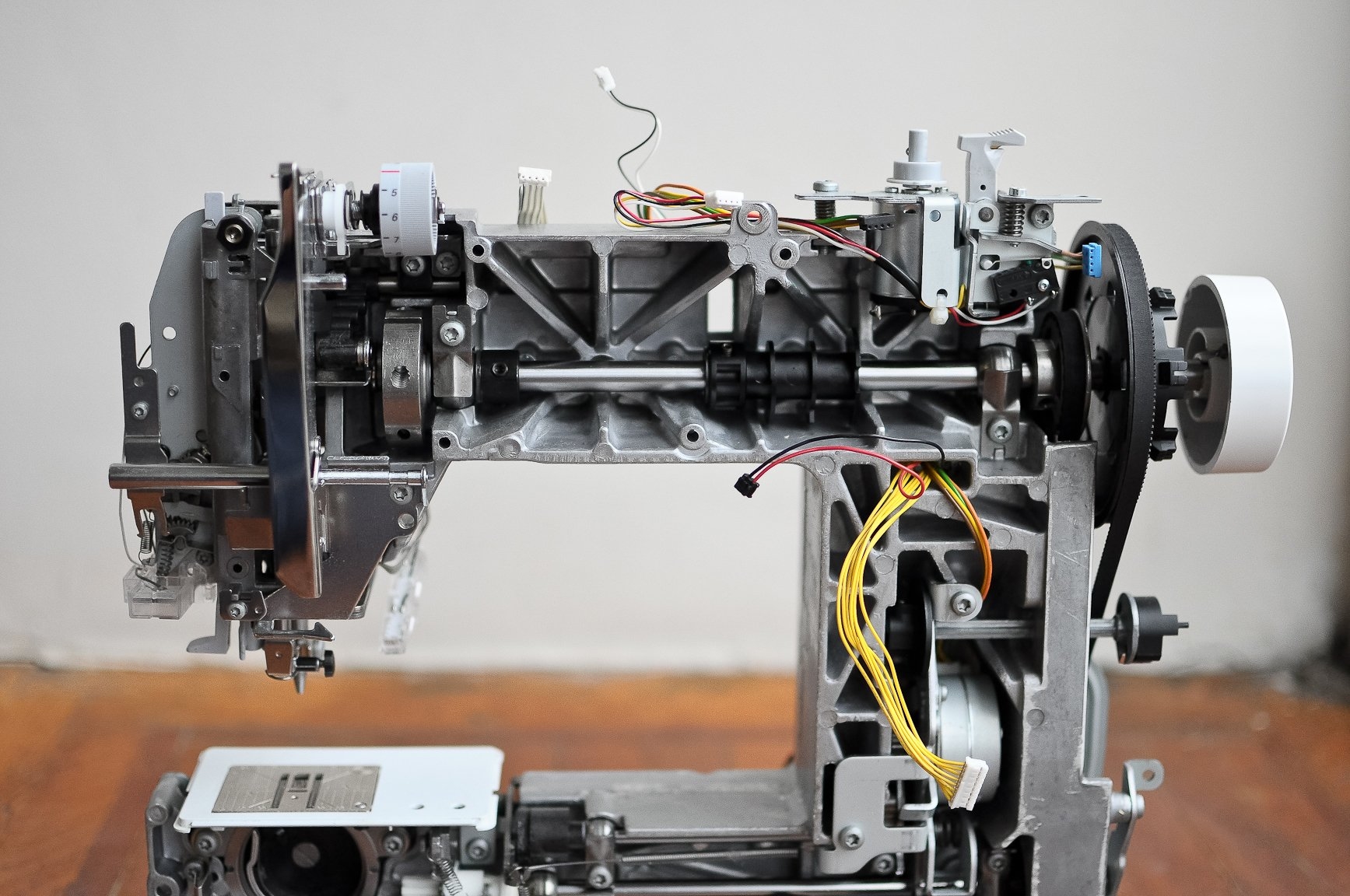 How does a sewing machine work?

A sewing machine's mechanism is based on 2 main principles:

All sewing machines (whether modern or old, electronic* or computerized, made by Singer, Brother or other) work this way. And they have done since 1834!

*By the way, it's worth mentioning that even if we usually call them "electronic" sewing machines, "electromechanical" is more accurate considering they're simply mechanical machines equipped with an electronic circuit to select settings. Basically, the electronic part is a remote control. The machine's mechanism does not change.

So sewing machines have evolved in terms of materials, power sources, options, etc. but the mechanism itself has remained virtually untouched since Walter Hunt invented it nearly 200 years ago.

The genius foundation of his invention was the realisation that, to replace men (or in this case, women) by machines, he needed to come up with a brand new sewing technique suited to a mechanical process rather than mimic the human way of sewing.

This is his technique:

A handmade stitch is made by passing a needle all the way through the fabric, pulling a single thread in its wake. The needle is the key element.

But with a sewing machine, the needle's only purpose is to prick the fabric to push one thread through, so it can make a knot with a second thread before being pulled back up. The knot has become the core.

Here's a slow motion gif animation of how a sewing machine works:

Now let's have a look at how the fabric moves in-between stitches.

Machine sewing would not be possible without its complex mechanism of belts, drive shafts, and cranks which transform the motor's rotation into a synchronised movement of:

The easiest way to understand how your sewing machine works is to open it and watch. But if you're afraid of damaging it, we did it for you.

It all starts with the machine's power source, which nowadays is an electric motor [1] operated by a pedal.

The motor's rotation drives a belt [2] stretched between two disks. To put it simply, it's like a bike chain connected on one side to the disc that turns when you pedal (= the motor) and on the other to the disc connected to the wheel (= the hand wheel [3]).

This hand wheel [3] is connected to the upper drive shaft [4]. A drive shaft is a cylinder of any length that rotates on itself, in order to transfer movement from one area of a machine to another. In the case of sewing machines, the upper shaft transmits movement to two components:

The bottom mechanism [9] is made of the bobbin case and its lower thread which forms the knot with the upper thread, and the feed dogs that move the fabric between stitches.

A complete stitching cycle depends on the sewing machine's power, but considering low-end models run at 600 rounds per minute (i.e. 10 stitches per second!) and high-end machines can go twice as fast, you can imagine the incredible precision of this chain reaction.

Note that the motor power also determines how much strength is given to the needle, enabling it (or not) to stitch through thick fabric. Therefore it's important to choose a sufficiently powerful machine.

And there you have it. You now know how a sewing machine works 😃

Edit: In response to Didier's comment (French version), here's a video that really goes into detail. It gives a super clear explanation of what goes on in a sewing machine and you can follow it even if you don't understand the words:

Thank You dear for the wonderful explanation of the mechanism.

Thank you! It was one of the clearest explanations I've found on the internet.

Thank you this was very
Informative